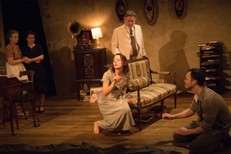 If you’re studying to be an actor, one of the most important things you can do is to immerse yourself in the local theater scene. By seeing lots of productions, you can start to get a sense not only of what good acting really looks like, but also of what kinds of plays appeal to you and the kind of work that various theater companies in the city are known for.

Unfortunately, because Chicago is ripe with so many storefront theater companies, it can be completely overwhelming to decide what to see. So to help you out, several of Green Shirt’s instructors shared their recommendations for nine of the best shows to see in Chicago this fall. Enjoy!

1. The Graveyard Shift
The Goodman Theatre
Through Oct. 7
Janelle relocates to Texas and moves in with her partner, Kane. Meanwhile, a small-town police officer’s life is thrown into flux when the co-worker he’s romantically involved with decides to leave town. When their worlds collide, Janelle and Kane experience firsthand how dangerous power can be. An unflinching but big-hearted look at how we navigate a world full of fear.

Why we recommend it: “’Graveyard Shift’ was incredible! The playwright used poetic language and magic realism to emotionally process what happened to Sandra Bland. Just beautiful and absolutely heartbreaking. Also the acting is fantastic!”
— Cordie Nelson

2. Naked
Trap Door Theatre
Through Oct. 27
Written in 1922 by Italian playwright Luigi Pirandello, “Naked” is about a young woman in despair who returns to Rome with a dark secret and meets several men who push her to edge. It’s a play that deals with gender power dynamics amidst social and cultural mores.

Why we recommend it: “’Naked’ is by Luigi Pirandello who was a turn-of-the-century Italian playwright who really pushed theatrical boundaries and uses meta-theatrical conventions in his work. Plus, Green Shirt alum Manuela Rentea is in this, and she’s one of my favorite actors in the city!”
— Sommer Austin

Why we recommend it: “This play has a fascinating and complex script with resonant themes that requires terrific ensemble work and both theatricality and searing truth. Plus Green Shirt Alexander student Rebecca Joy Fletcher is understudying!”
— Jeremy Cohn

4. Downstate
Steppenwolf Theatre Company
Through Nov. 11
In downstate Illinois, four men convicted of sex crimes against minors share a group home where they live out their lives in the shadow of the crimes they committed. This gripping and provocative new play by Pulitzer Prize-winning ensemble member Bruce Norris zeroes in on the limits of our compassion as it questions what happens when society deems anyone beyond forgiveness.

Why we recommend it: “I’m a huge Bruce Norris fan and love the ensemble-driven new work that Steppenwolf does. Bruce is a Steppenwolf ensemble member and this is a world premiere, so it’s great to see new Chicago theatre going out into the world.”
— Sommer Austin

5. Phoebe in Winter
Facility Theatre
Through Oct. 21
This critically acclaimed show from Facility Theatre is about three brothers who return home from a distant war hoping to settle into their old lives. But when a woman named Phoebe knocks on their door and accuses them of killing her own three brothers, she demands reparations—that they must become her new family instead.

Why we recommend it: “I heard that it’s being performed in a church basement, and I’m intrigued by the unconventional space (at least considering it’s a play about war and not the Nativity) and how it will impact the production.”
— Regina Linn

6. Caroline, or Change
Firebrand Theatre
Through Oct. 28
Set in Louisiana in 1963, this musical follows the story of Caroline Thibodeaux, an African-American mother of four and a maid working for the Southern Jewish Gellman family. Caroline struggles with changes both large and small and with her relationship with the little boy who lives in the house where she cleans.

Why we recommend it: “I love Tony Kushner and Jeanine Tesori’s musical, a show I saw the original production of in New York City. Its story of personal and political implications feels like a right fit for the moment, and the folks at Firebrand have a reputation for casting singers with vocal chops to blow the roof off of whatever venue they’re in.”
— Andrew Gallant

Why we recommend it: “I’ve worked with David Rabe and The Gift as assistant director of the world premiere of ‘Good for Otto,’ so I don’t want to miss this new work by Rabe. As Larry Silverberg says, and I agree with him, Rabe is one of our only living theatrical poets.”
— Sommer Austin

Why we recommend it: “I’m excited to see what the creative minds of Manual Cinema do to turn the usually staid, intellectual atmosphere of Court into an immersive theatrical experience.”
— Andrew Gallant

9. Hellcab
Agency Theater Collective
December 2018
If you’ve never had a chance to see this annual holiday classic, now is your chance. Directed by Cordie Nelson, Hellcab is about a cab driver who journeys around Chicago on a cold Christmas Eve in 1992, presenting a freighting, hilarious and poignant look at the Windy City.

Why we recommend it: “It tackles segregation in the city, the loneliness of the city, racism… It addresses how we can be so close together yet be so disconnected. It’s just interesting to see how relevant it is 25 years later.”
— Sommer Austin