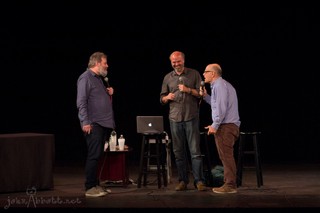 There is nothing worse for an actor than completely bombing on stage or in an audition. If you’ve ever spent weeks memorizing your lines, only to go completely blank on opening night, or realize you did an entire audition with your shirt on inside out, you know what I’m talking about.

Bombing on stage or in an audition is a rite of passage for all actors — a great way of proving to ourselves that even if our worst fears happen, we’ll still somehow come out the other side. And better yet, have a great story to share!

This week, we asked several of our instructors at Green Shirt Studio to tell us about one of the worst times they ever bombed on stage or in an audition. Because if they survived it, you can too!

Sommer Austin, co-founder of Green Shirt Studio, Meisner instructor
When I first started auditioning in college as an undergrad, my first audition was so bad and humiliating that I ended up running out of the theater in tears. I’m actually not even sure if I finished the audition or not. I chose a monologue in which a character was auditioning but forgot her lines in the middle of the monologue (classic, amiright?!), but I actually did forget my lines for real, and lost my place and tried to start over but because of the way the piece was structured, I couldn’t find my way through it, so at one point I just quit, and the entire thing was horrible and meta and very, very bad, and I was so embarrassed that I started crying and it all ended with me running out the door in shame. Good times! I can’t say I don’t still have humiliating audition experiences every now and again, but nothing’s ever really topped that one!

Tosha Fowler, Scene Study instructor
I was in a commercial audition for the drug Lyrica, which supposedly helps with fibromyalgia. The casting director asked me to do the copy a second time and rub my shoulder as if I was in pain from the disease. I did as she asked. She stopped me in the middle of it and told me that I was being way too sexual in rubbing my shoulder and that I looked like I was enjoying it too much. I was very embarrassed by this!

Ashlea Woodley, Meisner instructor
In one of my last shows in undergrad, I was costumed in a very large hoop skirt and corset in which I could barely breathe. Well, mid-line, I coughed, breaking a button on my skirt that caused my hoop to fall almost to my knees. I couldn’t remember my line for the life of me. I swear I heard crickets. I kept stammering and I stood there like a deer in headlights holding my skirt and hoop until my scene partner (now my husband) covered my line and I shuffled off stage to intermission. I cried through the whole intermission, haphazardly sewing my button back on since our costumer was out for the evening.

Jimmy Carrane, improv instructor
I think as an improviser I am always bombing on some level, which both sucks and does makes you better. The last time I bombed was a couple of weeks ago. I was doing Dan Harmon’s podcast, Harmontown, as part of the Chicago Improv Festival. The show was in front of 700 people at the Athenaeum Theater, and I was one of his guests along with Scott Adsit of 30 Rock. The first half of the show went really well, but toward the end of the show, Dan just stood up and started improvising a scene. It was a brilliant concept, where he was playing America and he made Scott and me his parents: England and France. Only I had no idea that I we were supposed to be countries. I thought he was playing a teenager and I was his French mother, so I kept reacting like a worried mom and screwing up the years, and he kept correcting me. I kept trying to “help out” and add stuff to the scene that just made it worse, when I should have just shut up and listened. About 15 minutes into the scene, it FINALLY dawned on me that I was supposed to be a COUNTRY, not his mother. How long have I been improvising? Oh, the shame. The best part is that it was in front of 700 people and was recorded for his podcast. If you are going to bomb, go big.

Jose “Tony” Garcia, Suzuki Method instructor
The bombiest moment that comes to mind was when I was cast as Big Daddy in Sweet Charity the summer after I graduated undergrad. Big Daddy has one song and one song only: “The Rhythm of Life.” Rehearsed my ass off. Practiced to no end. Teched. Now here’s opening night. The show kicks off without a hitch. Everything is going great. Intermission. Time for me to go and put on my Big Daddy make up, facial hair and wig.

I applied my make up. So much make up. You know, the way we were all taught to in school, but then quickly realized how little we actually needed once we got out into the real world? That much make up. Put on the wig, put on the facial hair. That’s right, I put on the facial hair AFTER I put on my makeup. First time I’d done that. All through tech I did the hair first and then the make up around it. Maybe it was opening night jitters, but for whatever reason I chose to put on my make up first and then the facial hair. Go to places. Lights up. Enter stage right and get ready to sing. My facial hair is peeling off. Holy shit. Slap it back on mid lyric. Get two more lines out. It peels again, more this time. Slap it back on again, hold it in place for a second as I continue to sing. At least I think I’m singing. Not sure which line I just sang. Not sure which line comes next. Mother of God. Am I about to go up on singing lines on opening night? Sure seems that way. Just sing something. Except that. You just sang that. You just repeated yourself in song. Kill me now. The song ends. Finally. Oh, I forgot there’s still a scene after the song for which I have to stay on stage for and also SPEAK WHILE MY BEARD KEEPS WANTING TO LEAP FROM MY FACE. Just get through it. It’s a short speech, pick up those cues and get out of there. Except that cue. You just said that cue. The ensemble is now looking at me with those deer-caught-in-headlights eyes. You know the ones. Because surely I can’t expect them to repeat their callback to me, the one they just did, right? Just keep talking and finish. End this. Please end this. I finally get to the end of the speech. My facial hair is now dangling from my chin like one of those little plastic monkeys from that game.

The sound cue for us to run off stage comes on. I have never run faster in my life. Pretty sure I could taste my heart up in the throat. Luckily I was surrounded by some wonderful people who assured me that it “wasn’t that bad.” To this day, I don’t believe them.